Record breaking summer for flights to Greece and Turkey

September 8, 2022 — Air travel to the southeast corner of Europe substantially exceeded pre-pandemic (2019) levels in the peak summer months of July and August. The report has come from ForwardKeys, which has the most comprehensive and up-to-date database of air ticketing available. The two largest destinations, Turkey and Greece, both exceeded pre-pandemic levels of international visitor arrivals by 9% and 2% respectively. Air travel to Albania (a relatively small destination with less than 1% market share of European flight arrivals) were also up by 28%. While no other major country destinations recovered to the numbers seen in 2019, Slovenia, just 7% down, Iceland, 8% down, and Portugal, 10% down, came close. 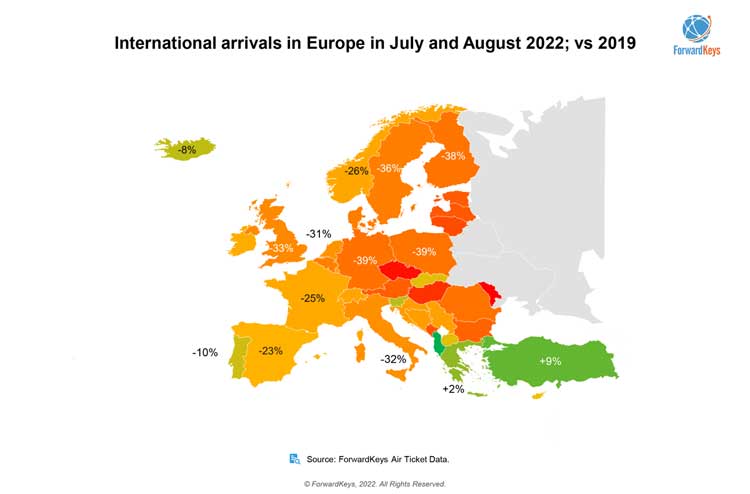 The list of best performing city destinations was headed by Istanbul, which recorded a 2% increase in flight arrivals. It was followed by Athens, 7% down, Reykjavik and Porto, both 8% down, and Malaga, 13% down.

Major factors driving the strong performance of Turkey include an ongoing decline in the value of the Turkish lira and its openness to the Russian market, from where direct flights to most of Europe have been banned. In the summer of 2019 Russians accounted for 4% of all arrivals to Europe, whereas in 2022, this dropped dramatically. Greece has performed strongly as a destination throughout the pandemic by implementing relatively visitor-friendly COVID-19 travel restrictions.

An analysis of origin markets reveals that within Europe, Greece has proven the most resilient, with departures for European destinations in July and August matching 2019 levels. It is followed by Poland, 9% down, Spain, 12% down, the UK, 13% down, Denmark, 14% down and Portugal 15% down. Overall, intra-European departures were 22% down.

The strongest extra-European market was the USA, just 5% down on 2019. It was followed by Colombia and Israel, both 9% down, South Africa, 10% down, Mexico 12% down, and Canada and Kuwait, both 13% down. Overall, extra-European origin markets were 31% down.

European destinations could have attracted more visitors during the summer months if the aviation industry had been better able to cope with the surge in demand for travel during late spring and early summer. Had there been no disruption, ForwardKeys estimates that the recovery in intra-European flight bookings would have been five percentage-points higher.

While there is much talk of recession and inflation damaging the prospects of a post-pandemic travel recovery, the trend remains positive. In July and August, air travel across the whole of Europe was down by 26%, however, the outlook for the next three months shows that as of 31st August, flight bookings were 21% behind the equivalent moment in 2019, with bookings for Turkey and Greece 20% and 5% ahead respectively. The next best booked destinations are currently Portugal, 3% behind, Iceland, 7% behind and Spain, 15% behind.

The strongest origin markets are led by the UK, where outbound flight demand for the next three months is just 2% down compared with before the pandemic. It is followed by Spain, 3% behind, the USA, 5% behind, Ireland 6% behind, and Germany 11% behind.

Olivier Ponti, VP Insights, ForwardKeys, said: “The recovery from the pandemic has  continued despite the travel chaos and capacity reductions caused by staff shortages. Right now, forward bookings for leisure travel show a continued recovery in air travel, post-pandemic; and, encouragingly, business bookings are catching up. However, we are still cautious about the outlook because the continued war in Ukraine and consequent impact on energy prices will negatively affect European economies, which will likely dent consumer confidence and corporate demand. That said, there is currently a concentration of flight bookings during the autumn half term peaks and Christmas, which could lead to further flight disruption if the recent recruitment difficulties experienced by the aviation industry persist.”

Tom Jenkins, CEO, ETOA, the European tourism association, concluded: “The insight ForwardKeys provides is invaluable to our understanding of recovery. Beneath the numbers, the predicted post-pandemic supply-side challenges within Europe’s tourism ecosystem remain. Operators report difficulty in placing business, and erratic service levels due to staff shortages and loss of client knowledge. Logistic constraints and new taxes at destination level add complexity and cost. Some hoteliers are doing well, seeing robust revenue at lower occupancy rates due to strong demand for reduced inventory. Others struggle: even with high occupancy, profit margins are eroded by rapidly escalating costs. Unwelcome though these things are, they are challenges posed by business returning. The industry is coping, but avoidable difficulties (such as uncertainty on taxes) are frustrating recovery.”