It’s one way traffic in the A-NZ travel bubble

by tarshdavid
April 20, 2021 — As travel is revived between Australia and New Zealand this week, research undertaken by ForwardKeys, which has the most up to date and comprehensive fight booking data available, reveals that Australians appear ready to flock to New Zealand.

buy Pregabalin powder On 6th April, New Zealand’s Prime Minister, Jacinda Ardern, announced that quarantine-free travel would again be possible from 19th April. In the week that followed, bookings immediately jumped, with the total number of tickets issued for bidirectional travel between the neighbouring countries reaching 49% of those issued in the equivalent week in 2019, the last “normal” travel year.

buy modafinil uk fast delivery Analysis of traveller profile shows leisure travel leading the way and business travel lagging. 91% of bookings were for leisure travel and 9% for business. However, benchmarked against the equivalent period in 2019, business bookings were further behind, 75.9%, compared with leisure, which were 68.8% behind. 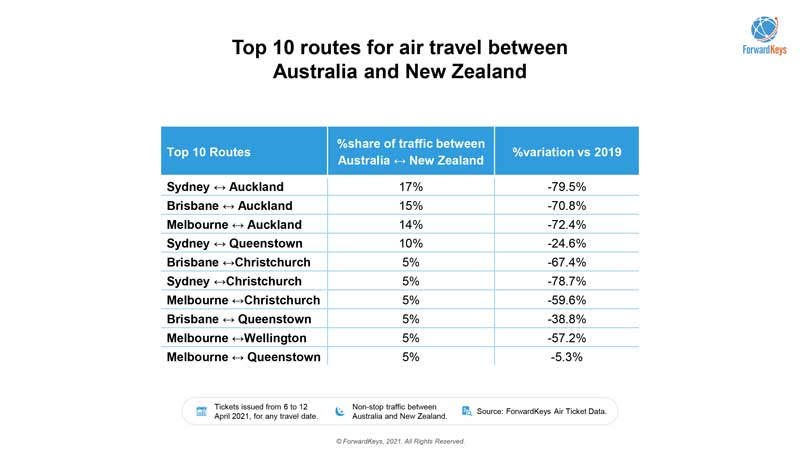 However, a quick look at comparative market shares reveals that bookings to Queenstown, which promotes itself as “the adventure capital of the world” have performed exceptionally strongly.  Overall, bookings made from the whole of Australia to New Zealand in the period 6th – 12th April were 27% behind those made in the equivalent period in 2019, but bookings to Queenstown were 16% ahead of pre-COVID levels. Closer inspection of travel timing suggests strong pent-up demand for winter sports, such as skiing and snowboarding, because 72% of the bookings to Queenstown are for arrival between June and October 2021 – the ski season in New Zealand. 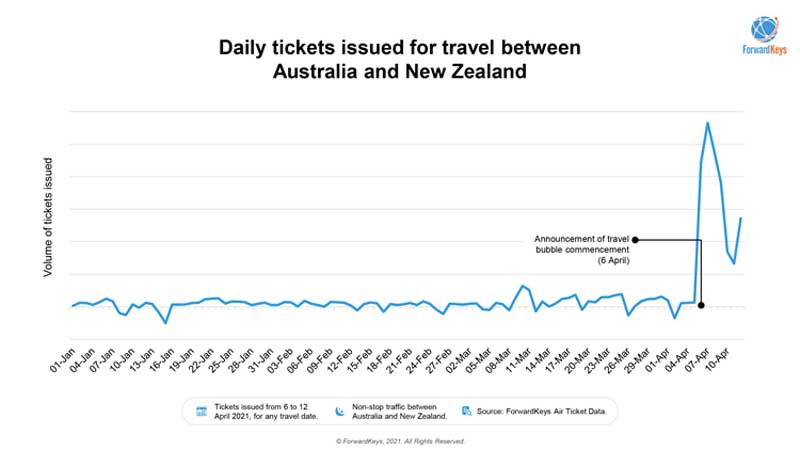 During the first quarter of 2021, the volume of flight tickets issued between Australia and New Zealand were just 0.8% of Q1 2019. However, the announcement that quarantine would be lifted triggered a 2,583% jump in tickets issued, compared to the week before.

Olivier Ponti, VP Insights, ForwardKeys commented: “We are observing the reactivation of travel and the release of pent-up demand. The shape of the revival is very much in line with what we have been expecting. Leisure travel is leading the charge, as many people have been longing to take a holiday; and they have seized the opportunity immediately. It is somewhat of a relief that business travel is not quite as depressed as many people have been predicting, as it is an important driver of profitability for the airlines.”

Olivier concluded: “Right now, it’s one-way traffic, with almost three times as much travel going to New Zealand as in the opposite direction. I expect this is partly explained by there being a much higher proportion of New Zealanders living in Australia (~600,000) than vice versa (~60,000), who are keen to fly back to see their families, and by enthusiasm for a winter sports holiday.”