May 28, 2020 — ForwardKeys, the travel analytics company, has revealed that Domestic air travel in China, which has been recovering slowly in the wake of the COVID-19 outbreak, has now reached more than 50% of what it was at the equivalent moment in 2019, based on issued air tickets.

In addition, analysis of flight ticketing data reveals a significant uptick in last minute domestic flight bookings in China between 11th May and 21st May. During that period, the lead time between ticketing and travel shortened dramatically; 72% of flight tickets were issued within 4 days of the travel date, compared with 51% at the equivalent point in 2019. ForwardKeys believes that this phenomenon is significantly influenced by students returning to university, as the timing coincides with universities reopening – a milestone that is expected to stimulate Chinese consumers to travel more. 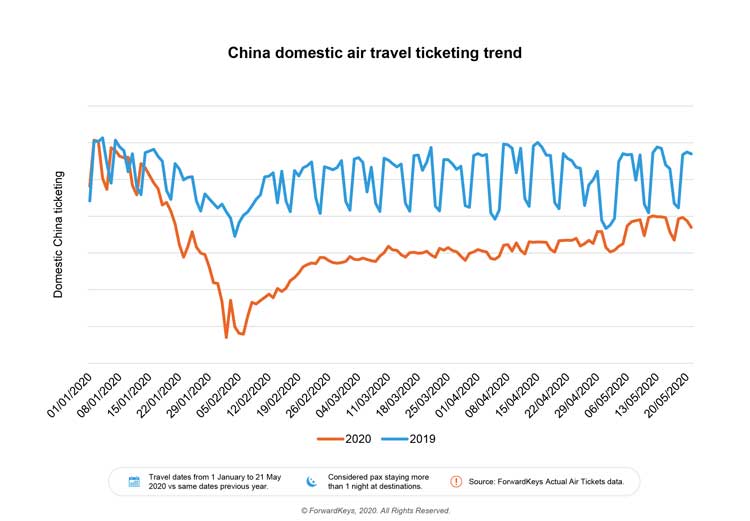 Looking back to the start of 2020, air travel surged in the first three weeks of January, thanks to Chinese New Year.  However, the COVID-19 outbreak spoiled the party and by mid-February the aviation market in China had all but collapsed. In the last week of that month, the recovery began; and passenger traffic jumped 62.9% (all be it form a very low base), coinciding with a weak restart of the economy and an increase in seat capacity. Throughout March and April air travel continued to pick up slowly until it received a fillip from the Labour Day holiday at the start of May.

While all this sounds encouraging, it is likely that a stronger recovery is underway in the hospitality sector, with many people choosing to drive or take the high-speed train rather than fly. According to the Travel Willingness Survey conducted by China Tourism Academy and China’s online travel agency Ctrip, in March, 41% of travellers said that they would travel by car once the coronavirus outbreak had been contained, 29% would travel by train, 16% would take a coach trip and only 14% would fly. Furthermore, China’s Ministry of Culture and Tourism has reported that 60% of vacationers travelled by car during the Labour Day holiday period. This hypothesis is further supported by reports of hotel occupancy now exceeding 60%. 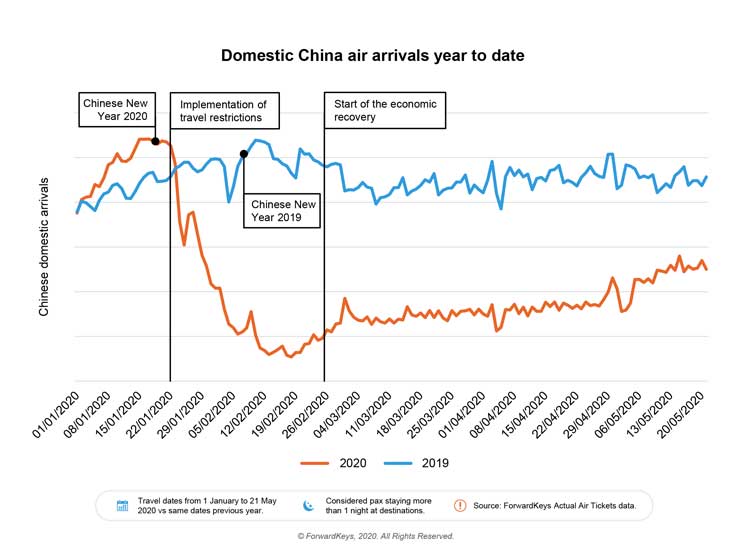 The revival will certainly be welcomed by everyone in the tourism industry but it needs to be kept in perspective because at the moment the business is mostly local; and, typically, the shorter the distance people travel, the less they tend to spend.

As of now, group travel between provinces is still prohibited but comment on various Chinese social media platforms predicts that the ban will be lifted in June, although there is no official news yet.

Olivier Ponti, VP Insights, ForwardKeys, said: “At the end of April, we were expecting to see an increase in domestic flight bookings as soon as domestic travel restrictions were eased and that indeed happened. Nevertheless, some restrictions are still in place; so, there is potential for further recovery when they are also removed. With regards to international travel, current strict restriction which limits 134 flights a week is due to be eased in the coming months, according to China’s aviation authority’s statement on 27th May. However, at this stage, the increased capacity is mainly intended to accommodate the demand of overseas Chinese to return home. I regret that there is no sign yet of a recovery in Chinese outbound tourism.”

He concluded: “I expect 2020 to be the year of the staycation for two principal reasons. First, in China (and in other countries too), the rules applying to international travel are continuously changing, which inhibits consumers from planning and booking a vacation abroad. Second, people are generally reluctant to give up on a holiday; so, if a domestic break is all they can get, many will settle for that.”