by tarshdavid
March 17, 2020 — A report by ForwardKeys, the travel analytics company, reveals that the United States’ transatlantic travel ban on most non US residents entering the country from the Schengen area, introduced in response to the coronavirus outbreak, has put 1.3 million airline seats at risk of elimination from the market as of midnight last night, when the exclusion was extended to the UK and Ireland. This is in addition to the 2 million seats placed in jeopardy on Friday.

The airlines which look set to suffer the worst are both US carriers, Delta and United, which each stand to lose around 400,000 seats. BA is next, followed, in order, by American, Lufthansa, Virgin Atlantic, Air France, Aer Lingus, KLM and Norwegian. 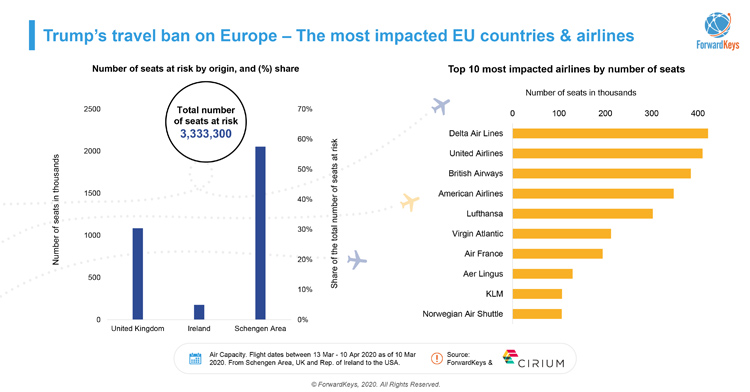 Olivier Ponti, VP Insights, ForwardKeys said: “Whilst a few flights are still operating, bringing permanent US residents and their immediate family back home, this is an unprecedented collapse in air travel. In an incredibly short space of time, this ban has decimated the world’s busiest and most profitable segment of the aviation industry, transatlantic travel.”