by tarshdavid
January 12, 2022 — A new report from ForwardKeys, which has the freshest and most comprehensive air ticketing data available, reveals there was a surge in flight bookings from and to Singapore on 22nd December last year, as travellers rushed to beat the suspension of Singapore’s vaccinated travel lanes (VTLs), which was implemented to curb the spread of the Omicron variant.

The VTLs were introduced in early September, allowing vaccinated travellers to Singapore to avoid being subject to a stay-home notice if they instead underwent multiple COVID-19 PCR tests. By late December, Singapore had VTLs in place with 24 countries. 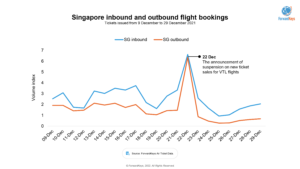 On 22nd December, Singapore announced a freeze on VTL ticket sales from midnight that evening until 21st January, when there will be a 50% cap on the previous quota. However, travellers who already held a ticket for a VTL flight could continue to enter Singapore under the VTL on their originally planned date. That day, outbound ticket sales jumped to over four times the daily average of the previous week and inbound more than doubled.

During the following week (23rd – 29th December) tickets issued for inbound travel fell by 51% and outbound fell by 76%, compared to the week before. 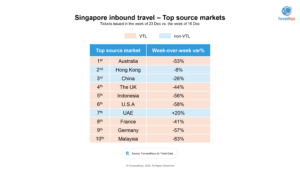 Analysis of the top source markets for Singapore revealed that all of the top ten suffered a substantial, double-digit drop in bookings, with the exception of Hong Kong, which suffered an 8% drop and Dubai, which was 20% up on the previous week. 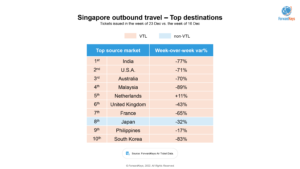 Analysis of the top ten destinations revealed an even greater decline in outbound flight bookings the week after the VTL suspension, with the exception of the Netherlands, which experienced an 11% increase.

Bing Han Kee, VP Sales – APAC at ForwardKeys, said: “The vaccinated travel lanes have been incredibly helpful in facilitating travel to and from Singapore, as seven of the top ten origin markets and nine of the top ten destinations are VTL countries. I suspect the resilience of the Netherlands as a destination is influenced by KLM, which is currently the foreign carrier with the largest share of the Singapore market, by number of seats.”