by tarshdavid
October 1, 2019 — A study by ForwardKeys, the travel analytics firm, has revealed that the Rugby World Cup (RWC) has fuelled a boom in tourism from the competing nations*.

During the period from 12th September to 6th November, which covers the tournament dates and a few days either side, flight bookings to Japan from the competing nations[1] are currently 38.1% ahead of where they were, during the equivalent period last year. The highest peak is on the day before the opening ceremony, with bookings from the competing nations more than double those on the equivalent date in 2018.

Olivier Ponti, VP Insights, ForwardKeys, said: “When we analyse these visitors in more depth, we see that their average length of stay is 11.7 nights. That tells us that few people are coming to watch a specific game and then returning home; the majority are making a holiday of their visit.” 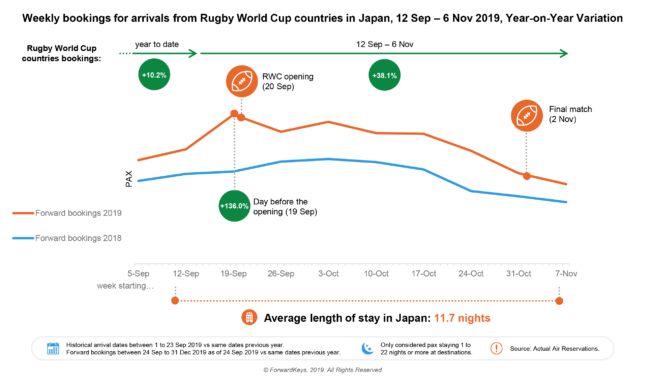 The RWC tourism boost is most strongly illustrated by visits from Ireland, which is not a mainstream tourism market for Japan and has no direct flight connections. Bookings for the period, 12th September to 6th November, are currently 500.3% ahead of where they were at this time last year. The average length of stay is 12.7 nights, which indicates that Irish visitors, having made the journey (the minimum flight time is 13.5 hours from Dublin to Tokyo) are also staying for a holiday in Japan. 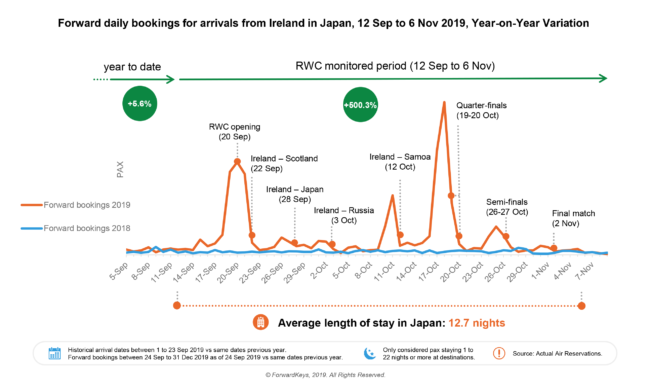 There are very clear booking spikes around the dates when the Irish are playing their matches, which also happen to be weekends. Olivier Ponti commented: “What intrigues me most is that the highest peak in bookings coincides with the quarter-finals. I’m tempted to suggest that Irish fans are confident of their team reaching that far but not necessarily any further; however, as Ireland is the world’s second ranked team, I suspect other factors are at play, such as the very limited availability of tickets for the semi-finals and final, and a strong preference of Irish rugby fans to take a two-week holiday.”