Riots cause collapse in air bookings to Chile

by tarshdavid
December 17, 2019 — Research undertaken by ForwardKeys, the travel analytics firm, which analyses 17 million flight bookings and 7 million flight searches a day, has revealed that the recent riots in Chile have taken a tremendous toll on tourism to the country. 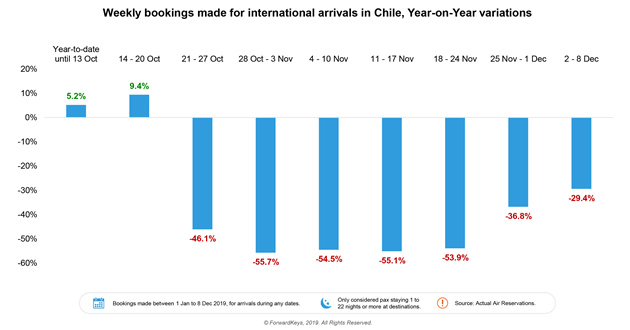 Protests against increases in the cost of living, social inequality and a fare hike on Santiago’s metro grew from their start on 7th October to a dramatic crescendo on 18th October when organised groups seriously damaged over 80 metro stations, with the result that the metro was closed down and a curfew declared in the Greater Santiago area.  Since then, the protests have spread to other cities and on 25th October, over a million Chileans took to the streets demanding the resignation of the President. 2019 Flight bookings to Chile prior to the protests and up to 13th October were 5.2% up on the equivalent period in 2018 and in the week of 14th-20th October were 9.4% up; however, the following week, they collapsed, 46.1% down. That trend continued, with bookings approximately 55% down for each of the following four weeks. In the past two weeks, which has been marked by the announcement of a $5.5 bn economic recovery plan by the President but continued rioting by protesters, the decline in bookings has eased slightly. During the week of 25th Nov-1st Dec, they were 36.8% down and the following week, 29.4% down. 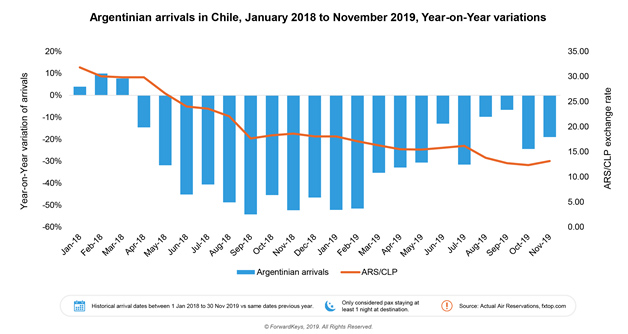 Olivier Ponti, VP Insights, ForwardKeys, commented: “Prior to the riots, Chile had actually been doing significantly better at attracting tourists than the 5.2% growth number for the first three quarters of the year suggests. This is because there has been a steep decline in visitors from one of its most important source markets, Argentina, owing to the collapse of the Argentine Peso.”

Since the beginning of 2018, the value of the Argentine peso has more than halved in value against the Chilean peso, with the result that visitor arrivals have fallen by 31.1% from January 2018 to November 2019. Looking on a month by month basis, benchmarked against the previous year, arrivals in Chile from Argentina fell to below 50% for the first time in September 2018 and that trend continued until March 2019, at which point, the pace of decline started to slow, although the decline continued.

Olivier Ponti concluded: “Before the riots, I would have predicted that the ongoing decline in bookings from Argentina would have stabilised by the end of this year; however, the recent political situation and a substantial drop in arrivals in November has left me feeling decidedly pessimistic.”