by tarshdavid
November 8, 2019 — The Latin American Travel Association (LATA) and global travel intelligence experts, ForwardKeys have revealed that travel to the region has grown 3.3% in the first three quarters of 2019 and forward bookings for the Q4 are 4.0% ahead of where they were at the end of Q3 last year.

Looking at the United Kingdom specifically, air reservation data over the last 12 months (up until 30 September 2019), shows a 1.2% decrease in total air arrivals in Latin America from the UK compared to the same period the previous year. However, by comparison, total international arrivals from the UK to the rest of the world have dropped by 1.6% during the same period – highlighting the resilience of the Latin American travel market. 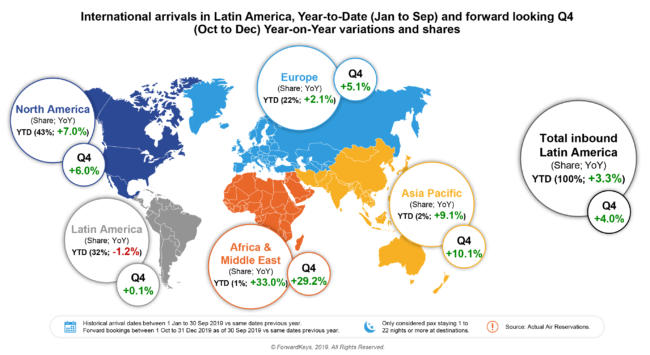 One key factor is the economic crisis in Argentina which has led to a decline in the value of its currency, the Argentinian peso, making the destination exceptional value for visitors, but travel abroad much more expensive for its citizens. As Argentina is a major source market for other countries in the region, they have suffered a fall in arrivals.

Looking specifically at Nicaragua, despite impressive tourism growth in 2017, in 2018 many of Nicaragua’s main markets enforced stringent travel advice following in-country protests having a major impact on the country’s travel industry. Prior to the protests, arrivals were up 5.1% y.o.y and bookings were up 7.0%. However, in the year that followed, arrivals in Nicaragua fell by nearly 60%. Recovery is now underway, with arrivals and bookings in the period May-Sep 2019 being dramatically up, compared to the volumes registered in the equivalent period the previous year.  This recovery is being supported by LATA’s campaign targeted at the UK travel industry entitled #NicaraguaIsopen and encompassing a range of promotional actions.

Much more recently, domestic unrest has also impacted Ecuador. The data shows that despite a short-term impact, once the protests stopped, bookings recovered very quickly. The protests also had some short-term impact on other Latin American countries, Columbia, Panama and Peru. 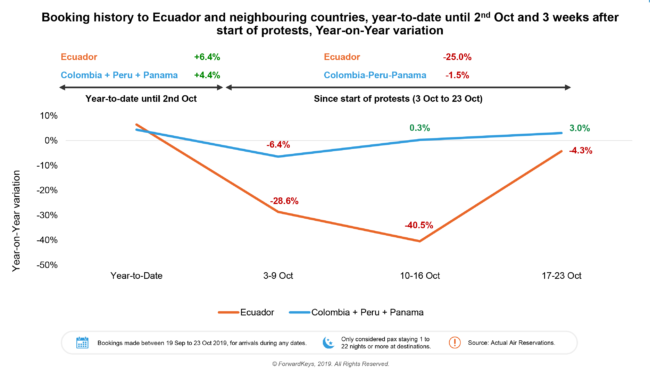 In the case of Chile, the country is currently experiencing protests in Santiago which could have a short-term impact on visitor numbers. However, the above examples show the ‘bouncebackability’ of destinations in Latin America. Felipe Uribe, chief marketing officer for the Chile Tourism Board said: “While there are currently protests in central parts of Santiago, much of the city and the rest of the country is unaffected and people can continue with their travel plans as normal.”

Olivier Ponti, VP Insights, ForwardKeys, commented: “In the coming months, I am expecting to see more travellers coming to Latin America from further afield. A major reason is that the airlines have adjusted their capacities, increasing it by 1.8% overall… and once the airlines have seats available, they do all they can to fill them.”

Colin Stewart, Chairman of LATA concluded: “On behalf of LATA, we are delighted to be collaborating with ForwardKeys to be able to showcase important travel trends in Latin America. It’s encouraging to see that cumulative travel to the region is growing and forward bookings are looking healthy. At LATA, our focus is to support sustainable growth to the region; and we are glad to have the WTM platform to meet with key LATA members and Latin American destinations.”