Demonstrations cause a 20.2% stall in flight bookings from Asia

August 13, 2019 — A freshly updated report from ForwardKeys, which analyses over 17 million flight bookings a day, has revealed that the recent wave of pro-democracy demonstrations in Hong Kong, culminating in the closure of the airport on Monday, has had the effect of deterring people from making plans to visit the city.

In the almost eight-week period from 16th June – 9th August, which has been marked by a two million strong demonstration accompanied by a general strike and riots on 16th June, the siege of police headquarters, the storming of the Legislative Council building on 1st July and, more recently, riot police charging protesters with batons and firing tear gas, numerous arrests, warnings from several countries about travel to Hong Kong and mass protests at the airport, flight bookings to Hong Kong from Asian markets* have fallen by 20.2% on the equivalent period last year.

In the first fortnight (16th – 29th June), bookings fell 9.0% and in the second (30th June – 13th July), 2.2%. At that point, it appeared that the demonstrations were having a short-term impact on short-haul travel. However, in the following 27 days (14th July – 9th August), there has been a dramatic drop in bookings – 33.4%. There is now clear evidence that the protests have reversed a positive travel trend in which bookings for the first six and a half months of the year were up 6.6% on 2018. 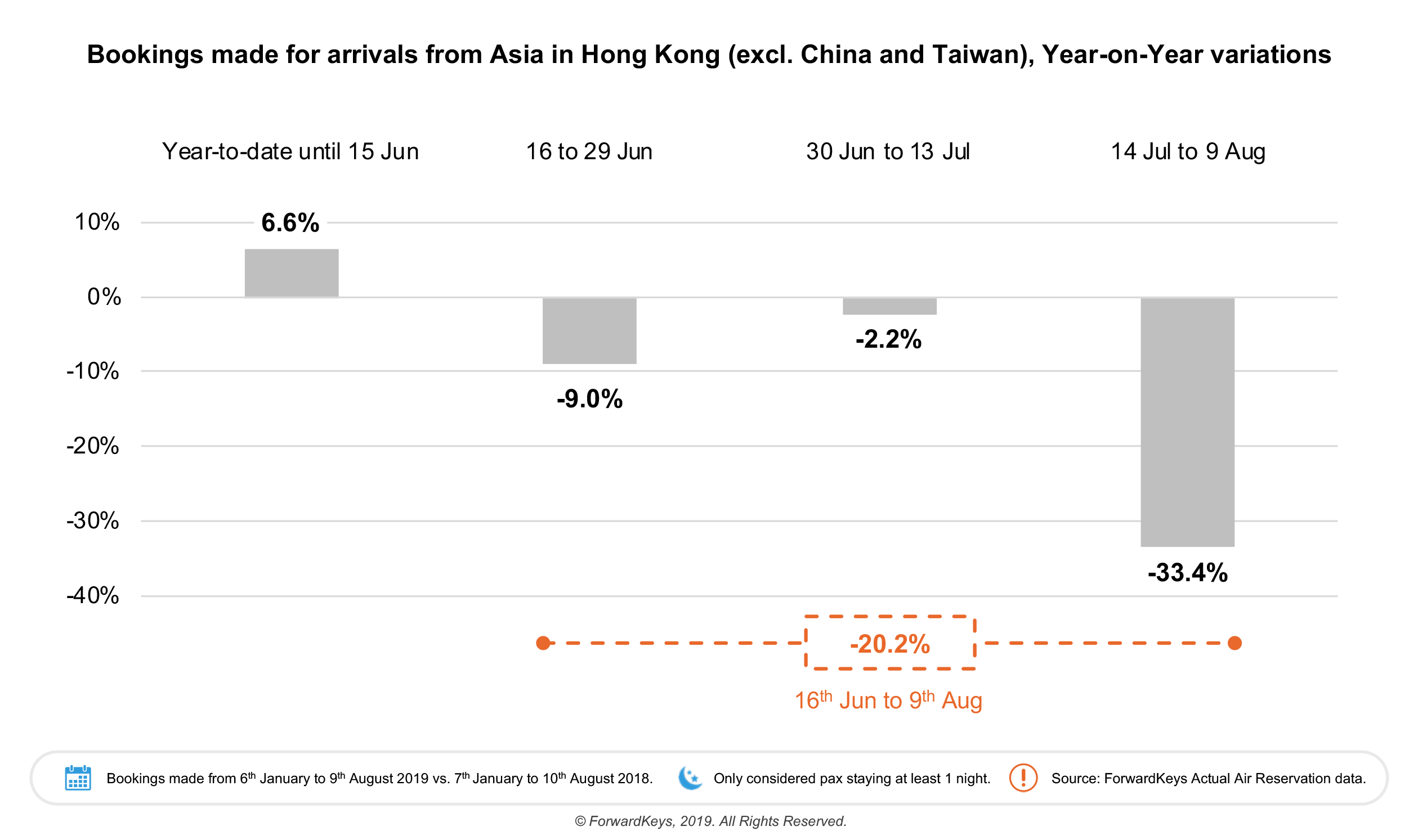 (*The bookings data excludes China and Taiwan because a fall in bookings from those destinations in the latter part of June could also be explained by the timing of the Dragon Boat Festival, which fell 11 days earlier this year than it did in 2018.)

David Tarsh, Spokesman for ForwardKeys, said: “The situation in Hong Kong has deteriorated substantially in the past eight weeks and particularly so in the past four. During June and early July, ForwardKeys saw no decline in long-haul bookings to Hong Kong; however, that is no longer the case. From 16th June to 9th August, long-haul bookings to Hong Kong are now 4.7% down on the equivalent period last year. Furthermore, ForwardKeys’ latest numbers do not yet include the events of Monday, when all flights were cancelled and video of police clearing protestors from the airport were beamed around the world; so ForwardKeys is not optimistic about reporting a recovery in the immediate future.”