by tarshdavid
April 30, 2020 — ForwardKeys, the travel analytics company, has revealed that domestic air travel in China has been recovering slowly in the wake of the COVID-19 outbreak. However, with yesterday’s news that Beijing has lifted its 14-day quarantine requirement on travel between the capital and low-risk areas in China, ForwardKeys now expects a significant uplift.

Olivier Ponti, VP Insights, ForwardKeys, said: “We have been expecting a jump in domestic flight bookings to occur as soon as domestic travel restrictions are eased and now that appears to be happening. It is currently still a little too early to see that trend in our flight data; but we expect to do so in the coming days, especially given the imminent Labour Day holiday. Whilst this looks like the emergence of the proverbial ‘green shoots’ of recovery; it is a domestic phenomenon; and Chinese international air traffic is still falling.” 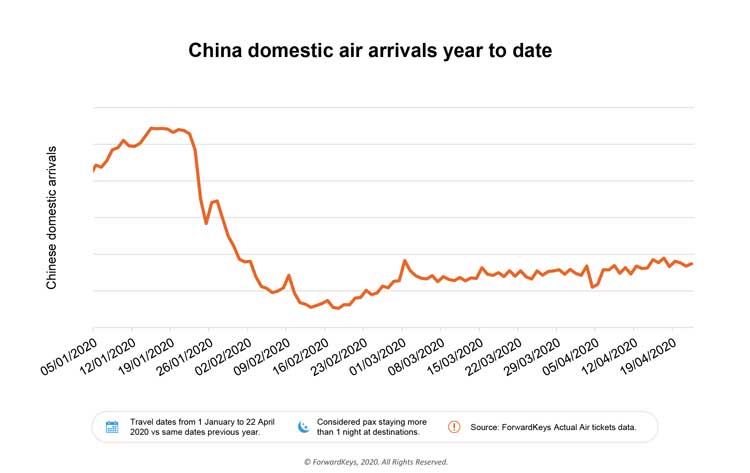 Chinese domestic air travel bottomed in mid-February, from which point it has been in muted recovery mode. In the week of 23-29 February, coinciding with a modest restarting of the economy and an increase in domestic air capacity, it jumped by 62.9% over the prior week. It has since grown from a still very low base, by 19.5%, between the first week of March and the third week of April.

The destinations leading the tentative recovery are commercial centres, Guangdong, Zhejiang, Shanghai, Sichuan and Yunnan. Travel to Beijing has been extremely weak because the strictest travel restrictions have been in force in the capital city until today.

Travel to Shenzhen, one of the China’s first Special Economic Zones, and to Hainan island, China’s tropical holiday hotspot in the South China Sea, is likely to be indicative of the recovery trend as it develops. In both cases, flight arrivals picked up in the third week of February, although the base was much lower for Hainan, as a leisure destination, than Shenzhen, which is a commercial centre. 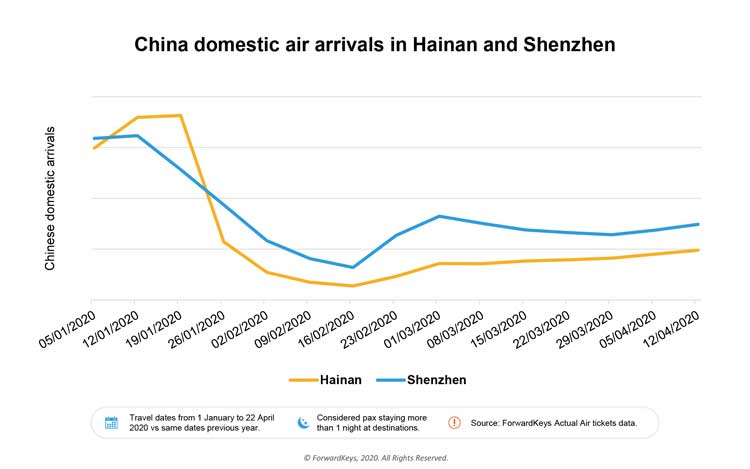 With regard to international travel, ForwardKeys is, unfortunately, not able to be optimistic, because China has imposed heavy restrictions on international flights. Chinese airlines are allowed only to maintain one route per country and one flight per week. Foreign airlines are allowed only one route to China and one flight per week. It is estimated that there will be just 130 international flights to China per week and a maximum of 5,000 people per day entering and leaving the country.

Olivier Ponti, VP Insights, ForwardKeys, said: “We can confirm tiny green shoots of recovery in China’s domestic aviation market. So, if you are a hotelier with properties and clientele in the right parts of the People’s Republic, you can look forward to welcoming guests again.  However, whilst it is encouraging to see air travel increasing within China, there is currently no indication that anyone outside China can yet look forward to the return of Chinese tourists. So, if you are a luxury goods retailer, seeking to sell to the Chinese market, the reality is that the only places to do so will be in China.”