Flight bookings to the USA soar

by tarshdavid
October 25, 2021 — New research from ForwardKeys, which has the freshest and most comprehensive air ticketing data available, reveals that flight bookings to the USA have soared following two announcements that the destination would reopen to vaccinated foreign travellers in November. By mid-October, weekly bookings exceeded 70% of pre-pandemic levels.

http://leapfroglettingsandsales.co.uk/property/naseby-court-brotton-ts12-2xp-2 The first announcement was made on 20th September, when the White House said that visitors from the United Kingdom, Ireland, the 26 Schengen countries, China, India, South Africa, Iran and Brazil would be allowed to enter the USA, without being subject to quarantine, provided they were fully vaccinated. That caused an immediate reaction, with week-on-week bookings from the UK jumping 83%, from Brazil jumping 71%, and from the EU jumping 185%!  The second announcement was made on 15th October, when the US President’s Assistant Press Secretary, Kevin Munoz, named 8th November as the date restrictions would be relaxed. Week-on-week bookings climbed higher still, jumping 15% from the UK, 26% from the EU and 100% from Brazil. 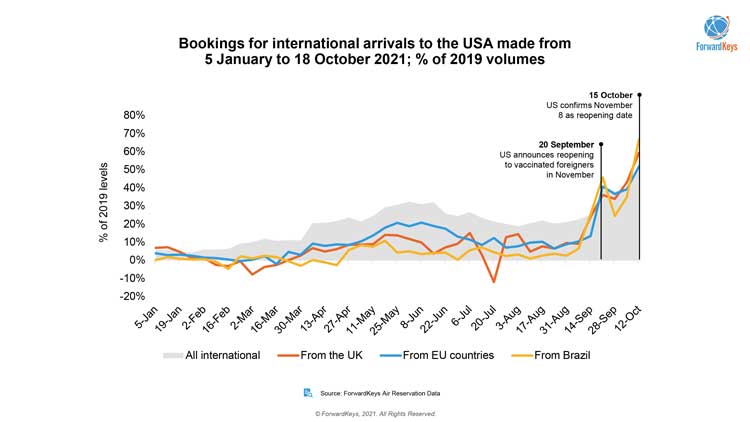 Quetiapine to buy Looking at the distribution of confirmed bookings, for arrival in November and December, from those three source markets (Brazil, EU and UK), there were two clear peaks. The first peak was for travel immediately after the relaxation of restrictions during the week commencing 8th November, achieving 15% of bookings. The second peak was over Christmas, achieving 16% of bookings during Christmas week and 14% the week before. 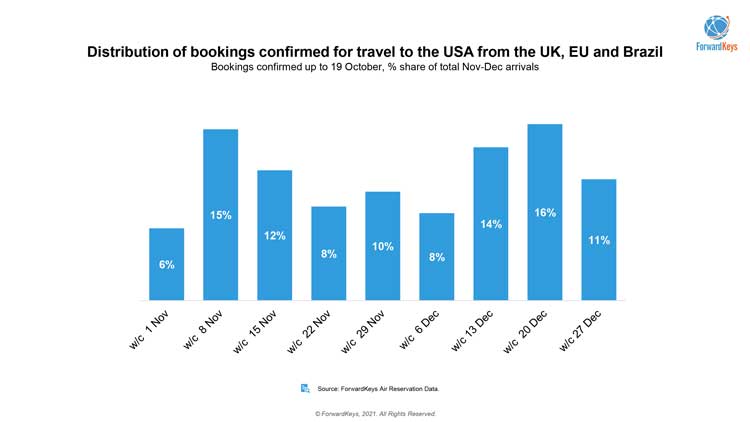 Juan Gómez, Head of Market Intelligence, ForwardKeys, said: “This data yet again demonstrates the enormous pent-up demand for travel. Immediately people heard that they would be allowed to visit the USA again; they booked; and a substantial proportion booked to fly as soon as they could. It is also interesting to note that bookings climbed higher once a specific date was given. That is not entirely surprising for two reasons. First, the certainty of a specific date inspires confidence. Second, those wanting to travel before the end of November could not afford to make a commitment until they knew for sure that they could travel when they wanted to. I am optimistic that in the coming weeks, we will see a steep increase in bookings to the USA for the Christmas period.”