Despite Dorian, travel to the Caribbean keeps growing

by tarshdavid
November 6, 2019 — A study, undertaken by ForwardKeys, the travel analytics firm, has revealed that despite the recent ravages of hurricane Dorian and other huge storms in the Caribbean, tourism will continue to grow. The results of the study were presented at a Caribbean Tourism Organization-organised news conference at World Travel Market this morning. 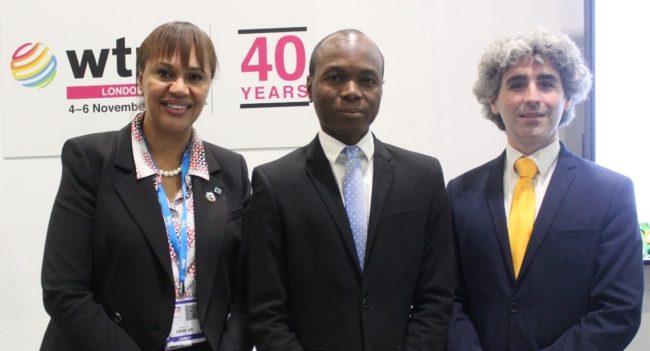 Forward bookings for the important winter season, 1st November to 31st January are currently 1.6% ahead of where they were at the equivalent point last year. Currently, bookings from the USA, the most important source market are 3.0% behind but bookings from all the other major source markets are ahead, France 9.8%, the UK 0.9%, Canada 8.2%, Argentina 8.1% and the rest of the world collectively 3.2%. The current leader is the Netherlands, 42.1% ahead. 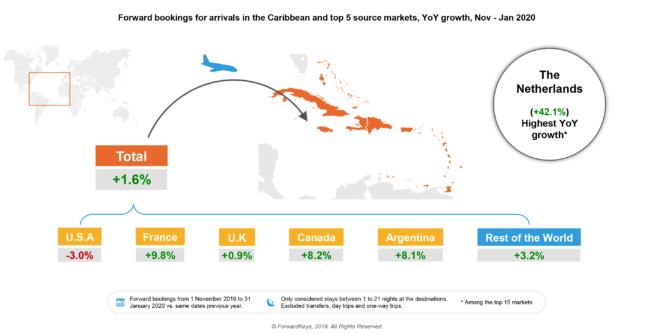 However, the outlook is not universally positive. Forward bookings to the top destination in the Caribbean, the Dominican Republic, are currently 14.2% behind and those to the Bahamas and Aruba are 6.4% and 1.4% behind respectively. Encouraging growth is seen from Puerto Rico, 28.0% ahead, but that is really a recovery story, as tourism to the island was hit hard by hurricane Maria in December 2017. 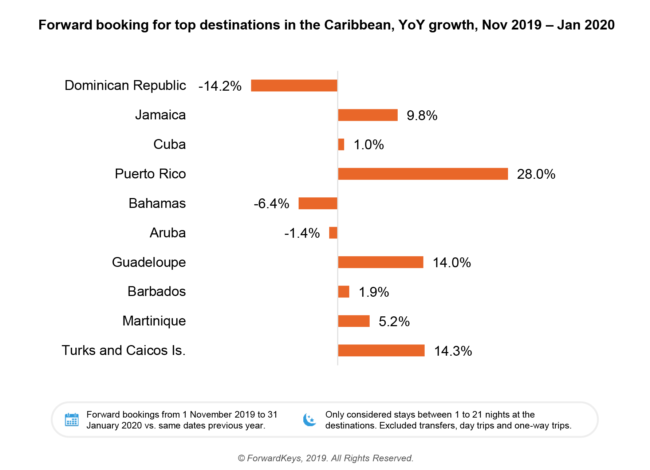 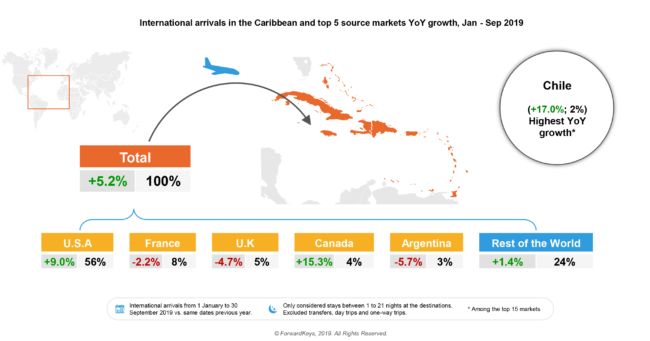 This season’s most devastating hurricane, Dorian, which came at the end of August and early September, ravaged the most northerly parts of the Bahamas but left other parts relatively undamaged. The result is that some parts of the country saw a drop in arrivals, where others experienced a significant increase. Travel to Freeport and Marsh Harbour in September fell dramatically, by 50.9% and 67.9% respectively. The impact on Nassau, the capital and the largest airport, was more limited, as arrivals went down by 7.4%. Travel to Georgetown and North Eleuthera was up, 10.6% and 30.7% respectively. 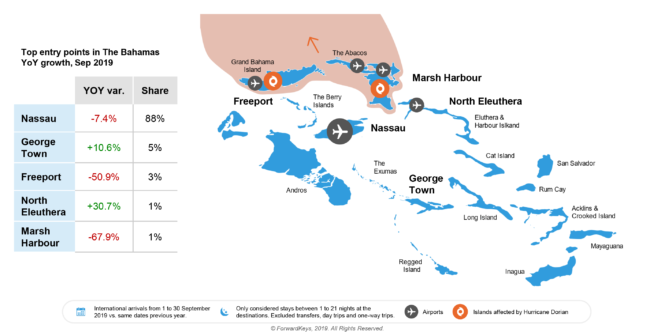 Hurricanes have been a major scourge, affecting travel to the Caribbean in recent years, with some islands left badly damaged. ForwardKeys research shows that recovering from the impact of a major hurricane can take years. So far, it has taken Puerto Rico 15 months to reach 70% of pre-hurricane arrivals and it has taken St Maarten 20 months. In the case of the Bahamas, ForwardKeys expects the recovery to take less time because the initial rebound in both post-hurricane arrivals has been stronger: just one month after the hurricane, the Bahamas has reached 80% of pre-hurricane arrivals. 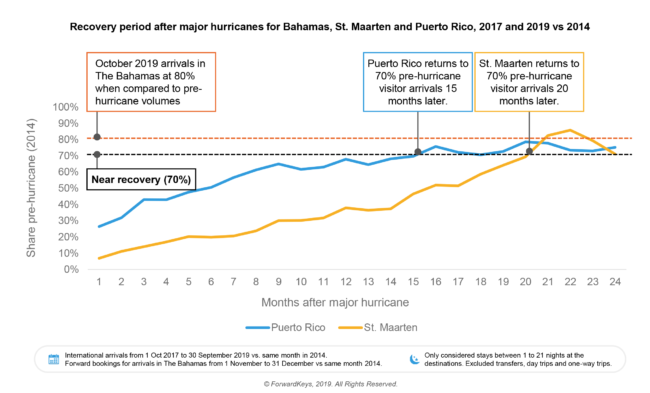 Joy Jibrilu, Director General, The Bahamas Ministry of Tourism said: “The Bahamas is an archipelago with more than 700 islands and cays, spread over 100,000 square miles of ocean. Because of our unique geography, a hurricane can impact some parts of the country, but leave other parts untouched. That is the case with Hurricane Dorian. The majority of our country remains beautiful and palm-fringed, with unspoiled beaches in several shades of white and pink. We would like everyone to know that the best thing they can do for us right now is visit. Our beautiful island nation is ready to welcome you.”

Olivier Ponti, VP Insights, ForwardKeys, concluded: “What we have seen in recent years is that the Caribbean is an incredibly popular destination. When some parts of it have been hit with horrendous hurricanes and other issues, tourist did not give up on their desire for a holiday in paradise; they chose other parts of it to visit instead. We saw that syndrome earlier this year, when stories in the US media about tourists who had died in the Dominican Republic, caused bookings to collapse; however, other islands, most notably Jamaica, the Bahamas and Aruba saw a visitor surge.”