February 28, 2020 — According to travel analytics company ForwardKeys, the travel setback caused by the coronavirus outbreak has now hit the world’s second largest outbound travel market, after China, the USA. In the five weeks following the imposition of travel restrictions on outbound travel from China (w/c January 20th – w/c February 17th), there was a 19.3% decline in the number of bookings made for travel from the USA. The majority of the decline has been caused by a collapse in bookings for travel to the Asia Pacific region, down by 87.7%. In other words, relatively few people booked a flight from the USA to the Asia Pacific region in the past five weeks. 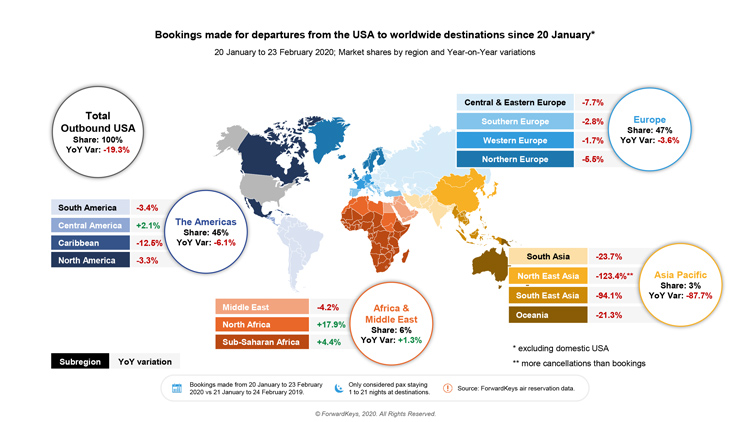 The setback in outbound bookings from the USA during that time has not just affected the Asia Pacific region; a similar but milder trend has affected other parts of the world too. Bookings to Europe have fallen by 3.6%, and to the Americas, have fallen by 6.1%. However, bookings to Africa & the Middle East, which has only a small (6%) share of outbound US travel, have increased by 1.3%. Breaking the world down into 15 different regional destinations, all have seen a drop in bookings from the USA, in the past five weeks, with the exception of North Africa, Sub Saharan Africa and Central America, which have seen their bookings rise by 17.9%, 4.4% and 2.1% respectively. In the order of least to worst affected, bookings were down as follows: to Western Europe by 1.7%, to Southern Europe by 2.8%, to North America by 3.3%, to South America by 3.4%, to the Middle East by 4.2%, to Northern Europe by 5.5%, to Central/Eastern Europe by 7.7%, to the Caribbean by 12.5%, to Oceania by 21.3%, to South Asia by 23.7% and to South East Asia by 94.1%. In the case of North East Asia, there were more cancellations than new bookings. 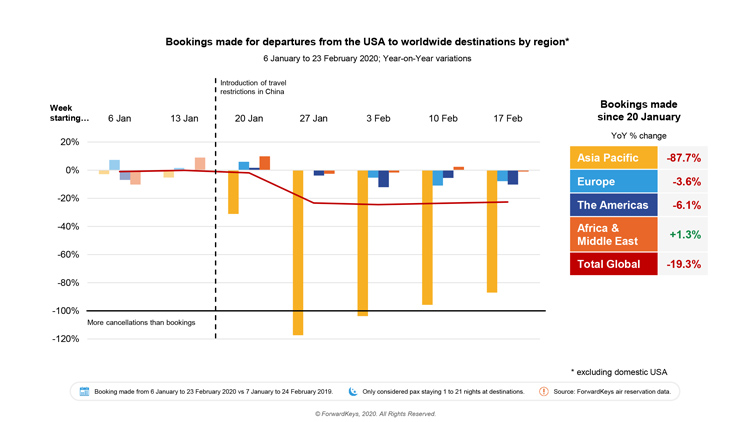 Whilst the trend of the past five weeks is not encouraging, the outlook for the coming months, judging by the current state of bookings for March, April and May, is perhaps not as bad as might have been feared because a large proportion of long-haul bookings are made several months in advance. As of 25th February, total outbound bookings from the USA are 8.0% behind where they were at the equivalent date last year. The majority of the lag is caused by a 37.0% slowdown in bookings to the Asia Pacific region. Forward bookings to Africa & Middle East are 3.9% ahead, to Europe are flat (0.1% ahead) and to the Americas are 4.1% behind.

Olivier Ponti, VP Insights, ForwardKeys said: “Now it’s not just China but the world’s second largest and second-highest spending outbound travel market, the USA, which is stalling. For destinations, businesses in the travel industry and in luxury goods retail, which rely heavily on American and Chinese tourists, it is crucial to look carefully at travel data on an almost daily basis. With the high volatility of the market, the success of these businesses will depend on their ability to take action the moment things start to recover.”