UK flight bookings take off as travel tests are removed

February 9, 2022 — New research from ForwardKeys, which has the freshest and most comprehensive, commercially available air ticketing data, reveals that flight bookings to and from the UK have soared following the government’s announcement that COVID-19 testing would no longer be required for fully vaccinated travellers entering the UK.

The day after the announcement by UK Transport Secretary, Grant Shapps, which was made on 24th January, combined inbound and outbound flight bookings jumped to 84% of pre-pandemic (2019) levels, outbound to 106% and inbound to 47%. 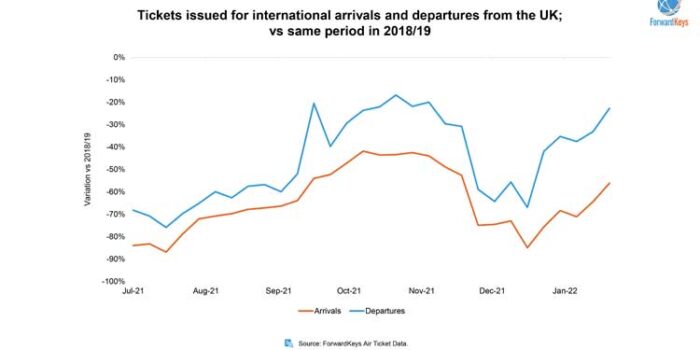 This news followed a series of relaxations in rules affecting travel to the UK, each triggering bookings spikes.

On 5th January, the UK said that from Sunday 9th January, fully vaccinated travellers would be able to take a lateral flow instead of a PCR test on or before day two of their arrival in England. Ten days later, the Times newspaper issued a report (which was not denied) that travellers would be able to go on half-term holidays without taking COVID-19 tests on their return. 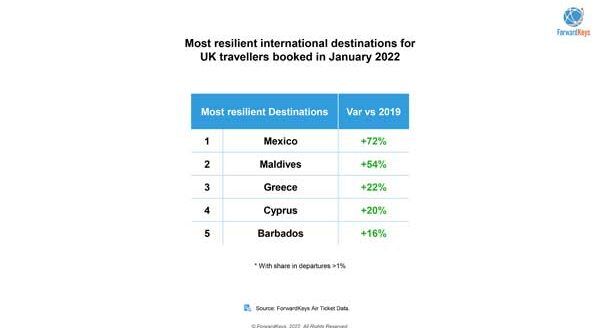 The typical seasonality patterns have returned and are evident in the recent recovery, with peaks showing for the forthcoming half-term break in February and the Easter holiday period, when looking at flight tickets confirmed in January.

In relative terms, the demand to travel abroad during the extended holiday weekend to celebrate Queen Elizabeth’s Platinum Jubilee, in early June, is already 13% ahead of 2019. 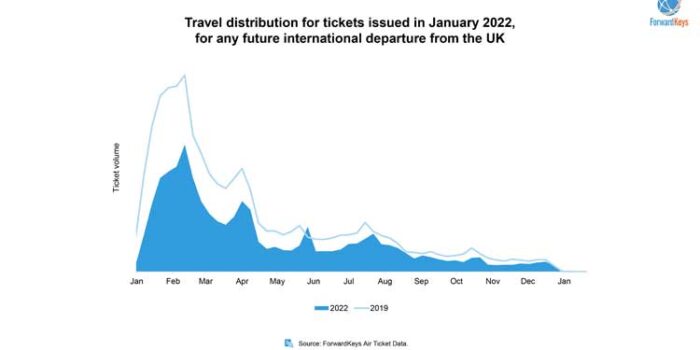 The destinations which are doing best for the upcoming half-term break are now all ahead of where they were at the end of January 2019.

“The list is dominated by long haul destinations, which offer beach holidays or have a relatively strong market for Visiting Friends and Relatives (VFR), such as Pakistan.” 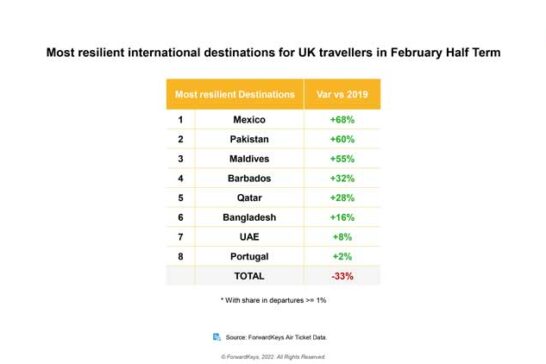 Bookings for Easter and summer holidays are relatively stronger than they are for the upcoming half-term break.

Benchmarked against the end of January 2019, half term bookings are 33% behind, whereas Easter bookings are 29% behind and summer is 16% behind.

Compared to this time last year, when the UK was in a state of limited lockdown, bookings are, unsurprisingly, much healthier, 59% ahead for Easter and 82% ahead for summer.

The recent surge in outbound bookings has been closely followed by a modest revival in inbound demand. 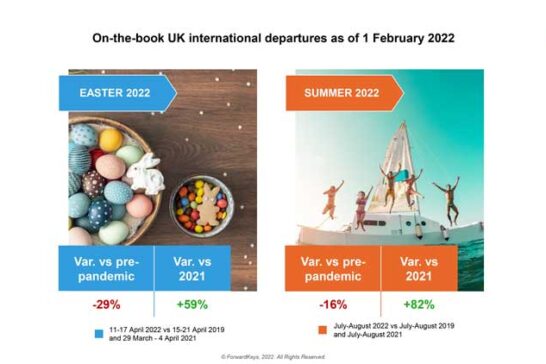 Olivier Ponti, VP of Insights at ForwardKeys, said: “Chocks away!”, a term used by WW2 pilots to remove the blocks in front of their undercarriage so they could take off, is the ideal metaphor to describe what’s happening right now in the market for travel to and from the UK. By withdrawing the impediment of testing and the risk of quarantine for fully vaccinated travellers, flight bookings are surging ahead.” 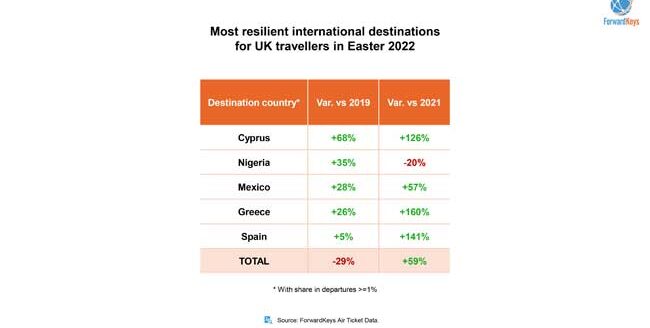 “What I find particularly interesting is the continued dominance of classic sea and sun destinations. A clear sign that the pandemic is still very much with us is the absence of a revival in city tourism or travel to airports strongly associated with skiing. However, if we see Continental European countries relaxing their travel restrictions in the way the UK has just done, I expect to see a flood of holiday bookings that could exceed pre-pandemic levels, thanks to a release of the huge pent-up demand.”