Chinese New Year travel was 69.3% down

March 1, 2021 — Research undertaken by ForwardKeys, the travel analytics firm, reveals that domestic air travel in China during New Year Golden Week (11th – 17th February) was 69.3% down on the equivalent period in 2019, when travel was at normal, pre-pandemic levels. Domestic travel during the fortnight before, which is traditionally a busy period for Chinese people returning home to spend the holiday with their families, was 62.3% down. 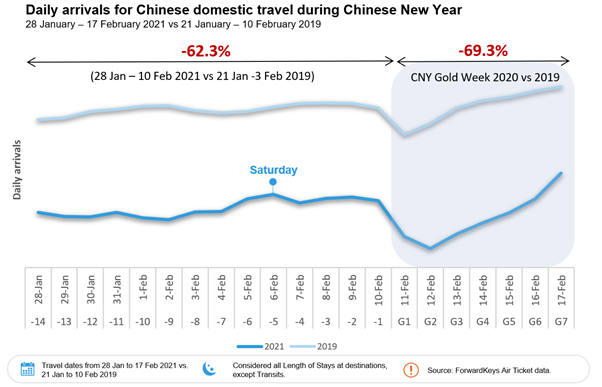 http://orocosta-tropicals.com/foliage/novelties-others/lillie-grass-green-var/ Looking at the different destinations within China, Sanya, the southernmost city on Hainan, China’s holiday island in the South China Sea, and a shopping Mecca, proved to be the most resilient in terms of tourism numbers, receiving 66% as many visitors as it did in 2019. Zhengzhou, the capital of Henan province was the second most resilient destination, receiving 41% as many travellers as it did in 2019. Shenzhen, another shopping hotspot and the city which links Hong Kong to mainland China, was in third place. Travel to Haikou, in the capital of Hainan, also proved relatively resilient, as it attracted 40% as many visitors. Chengdu and Chongqing, two major cities in Southwest China, famous for their natural scenery and cuisine, occupied fifth and sixth places in the resilience rankings, achieving 39% and 36% of 2019 visitor numbers, respectively. 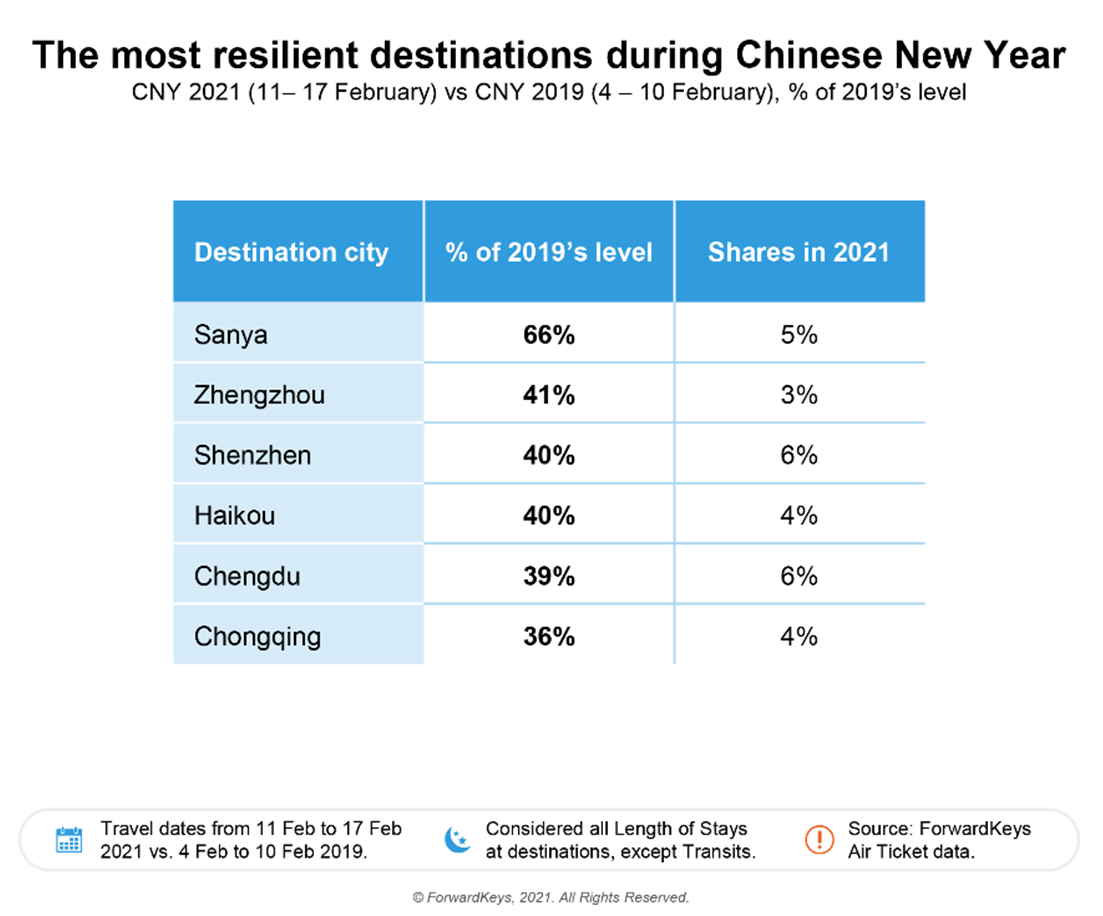 Whilst the drop in travel was extremely severe, it was not as bad as had been expected just 8 days earlier, when bookings for Golden Week travel were 85.3% behind where they were at the equivalent point in 2019. A sudden surge in last-minute bookings was prompted by announcements from several local authorities that travel restrictions were being eased. Travel to Sanya is a good example. It was greatly helped by the announcement on 1st February, that travellers from low-risk areas did not need to take a PCR test before visiting the island, at which point, issued tickets surged and even overtook 2019’s level from 4th February. 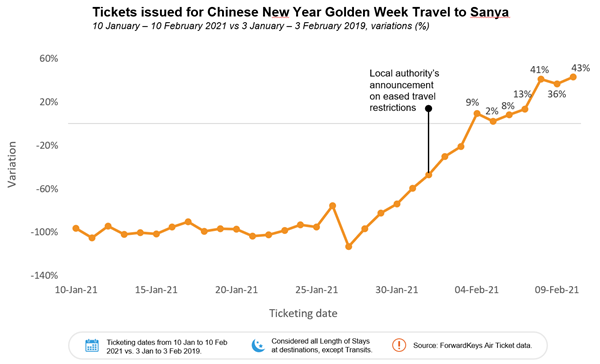 Olivier Ponti, VP Insights, ForwardKeys commented: “From a travel perspective, this Chinese New Year has been dreadful. Excluding Sanya, no major destination in China managed to get close to half the number of domestic visitors it received in 2019; and only four major destinations managed to reach two fifths! However, the situation could have been much worse had it not been for a surge in last minute bookings, owing to a loosening of travel restrictions.”

Olivier Ponti concluded: “The Chinese domestic aviation market has been incredibly volatile; and that volatility has been driven in one direction by a powerful pent-up demand to travel and in the other by resurgences of COVID-19 and the imposition of travel restrictions. At the beginning of September, with COVID-19 seemingly eradicated from China, domestic aviation returned to pre-pandemic levels; however, the recent modest outbreaks have hit Chinese New Year travel. But as China cleared all high and medium-risk areas on 22nd February, which means the latest COVID-19 outbreak has been contained, we believe that considerable pent-up demand will be released in the spring, especially during the Labour Day holiday in May. As of 19th February, flight tickets issued for the Labour Day holiday (1st – 5th May) were only 8% behind where they were at the equivalent moment in 2019.”