by tarshdavid
April 28, 2020 — Research released by ForwardKeys, the travel analytics firm, has revealed the extent of the collapse in aviation in the wake of the COVID-19 outbreak. In the year to 19th April, air travel fell to exactly half of what it was in the equivalent period last year.

The cancellation rate peaked in mid-March and global aviation seat capacity has fallen from over 40 million seats in operation to less than 10% of that number today. However, despite the evaporation of demand, flight search data reveals that consumers are still dreaming about travel. The year-to-date drop-off in flight arrivals has been most severe in the Asia Pacific region, where the outbreak started, down 56.1% on the equivalent period in 2019. Europe is next, with arrivals down 50.2%. Travel to Africa & the Middle East is down 42.6%; and travel to the Americas is down 39.8%. However, with over 90% of all flights currently grounded, the year-to-date trend is set to deteriorate substantially in the near term.

ForwardKeys’ analysis of year-to-date flight bookings shows that they are 86.8% down compared to the first 15 weeks of 2019. Bookings from Asia Pacific are down by more than 100%, which means that in the period, new bookings were outweighed by cancellations. Bookings from Europe were down by 84.7%, from the Americas were down by 75.9% and from Africa & the Middle East were down by 71.4%. Throughout March, there have been effectively no new bookings, as well as a massive wave of cancellations – and that pattern has continued into the first two weeks of April. 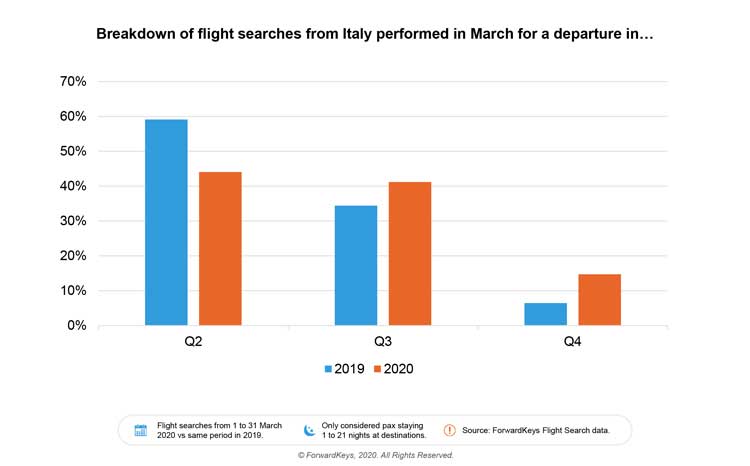 ForwardKeys has also undertaken an analysis of flight searches done in several countries during March, when most of the population has been in quarantine. It reveals that they are still researching foreign travel and, furthermore, that they have a disproportionate interest in long haul travel in the third and fourth quarters of the year. Countries researched include France, Italy, Japan, Spain and South Korea.

Olivier Ponti, VP Insights, ForwardKeys, said: “Whilst we are currently looking at a catastrophic contraction of the aviation market, with a tiny proportion of flights still in the air, carrying cargo, repatriations and essential travel, there are some noteworthy patterns in the data to bear in mind. First, the peak for summer holiday bookings is in May, so if the lockdown can end soon, there may yet be a chance to rescue the summer season, at least partially. Second, flight search data strongly suggests that consumers aspire to travel; so, once the restrictions are lifted, the market will eventually come back.”