Impact felt across Latin America and beyond

The fall-out from Argentina’s financial turmoil is having a huge impact on travel to and from the country, according to latest figures from ForwardKeys which predicts future travel patterns by analysing 17 million booking transactions a day.

buy Pregabalin 150mg tablets Outbound travel bookings collapsed after the Peso crashed in May and President Macri asked the IMF for a bailout. Bookings for travel from Argentina to other Latin American countries (which have the largest share of Argentina’s outbound travel, at 43%) slumped year-on-year by 26.1%.

Total international outbound bookings were down 20.4%, having shown an increase of 8.4% between January and April. Other destinations hardest hit are the US and Canada down 18.2%, and the Caribbean, down 36.8%. All had shown increases up to

rencontres gays nantes Chile tops the list of countries showing the largest falls in flight bookings from Argentina year-on-year, down 50.6%. Cuba is down 43.2%.

buy cheap Quetiapine with dr. prescription The ForwardKeys findings show the countries most potentially affected by Argentina’s travel collapse, because of their market share of its visitors, are Brazil, Paraguay, Uruguay and Chile, followed by Bolivia, Peru, Cuba and Colombia.

Argentina itself is also suffering an inbound decline among Latin American travellers who are nervous about its current economic difficulties. Bookings made in May were nearly 14% down on those made in May last year.

Looking ahead, Argentina’s problems are set to persist as the country struggles to find economic cures. Bookings for arrival in June to August are behind by 4.9% on last year. Bookings from Brazil alone are lagging by 9%.

Argentina is not alone; its difficulties are echoed in the tourism outlook for Latin America and the Caribbean as a whole, where bookings for June, July and August are 2.0% behind last year’s. In Central America, the slump has been largely caused by Nicaragua’s social unrest and volcanoes in Guatemala. In the Caribbean some destinations are still struggling to recover from recent hurricanes. Chile and Cuba have been hit by the woes of their important source market, Argentina. 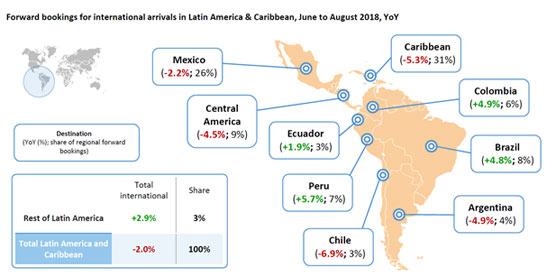 ForwardKeys CEO and co-founder, Olivier Jager, said: “I was in Buenos Aires just two months ago and everything was buzzing but all of a sudden, Argentina has suffered a very severe reversal of fortune. For the first four months of this year, growth in both inbound and outbound travel was extremely healthy but in May everything changed. Normally a fall in a country’s currency will lead to a surge in bookings as the destination becomes tangibly better value for international visitors. However, a severe decline which is triggered by a domestic economic and political crisis, can actually have the opposite effect and put off visitors, at least in the short term.  I wish I could point to a rebound but there is little evidence of that right now.”